Ian was kind enough to take me over to the Idaho History Museum before the Dia de Los Muertos Festival exhibit ended (which is later on today). I have always wanted to go to the IHM this time of year, but usually school usually prevented me from doing so. Before we finally ended up downtown, Ian wanted to head over to see the temple (he was raised LDS and still is an active practitioner) before the open house ended later on today too. Today is the last day that anyone can see it before it's closed off to the public and open for the re-dedication ceremony. Since I'm not LDS and don't have a temple recommend, I won't be able to attend the re-dedication ceremony. :<

We were able to do both of these events, since the temple was in east Boise, and the history museum was downtown. They were fun. 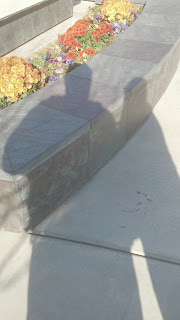 Ian's phone was the only one working properly (mine was reacting weirdly due to the cold-it was 24 degrees outside!), so this is as closest as we could get with a picture with the both of us in it on temple grounds (since people were making a beeline toward the warm reception area, no one was around us to take a proper picture of the both of us). Hey look! We're shadow people! :P 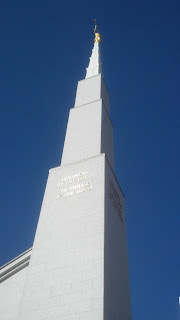 The very top of the temple. You can't see it very well, but there's a golden angel blowing a trumpet on the end. It's a hell of a sight up close. 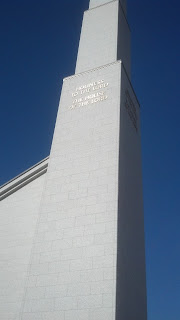 A closer look of the name of the temple. It's the one in Boise, Idaho. If you're wondering why we didn't get pictures of inside the temple, they told us that photos or videos of any kind weren't allowed. Sorry. 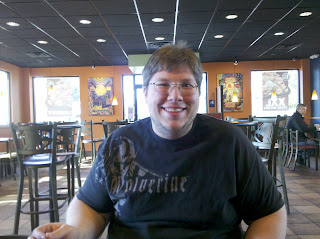 Ian and I decided to go for a brunch break, since we were both hungry as hell. We decided to hit up the Taco Bell by Boise State University. Here is a picture of my hubby caught unaware. Isn't he cute? ;3 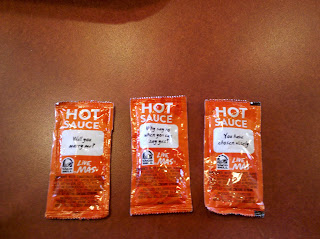 I wonder if someone has used these to propose and reply (in dealing with marriage, of course) around here... 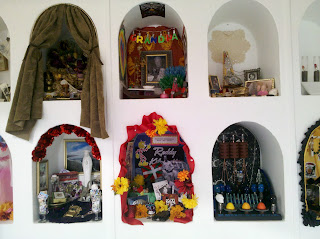 After the brunch break, it was off to the Idaho History Museum, finally. The Dia de Los Muertos altars were located up front. The only free parts were the altars and the Pioneer Village located outside. The website has false advertising. If you wanted to go before five today, it costs cash to get into the rest of the exhibit, and we only had cards on us. Anywho, part one of the altars are by artists and children in the Treasure Valley. My favorite ones are the top middle one and the bottom three in this group. The other altars on this side were a bit boring, so I didn't take a picture of them. >.> 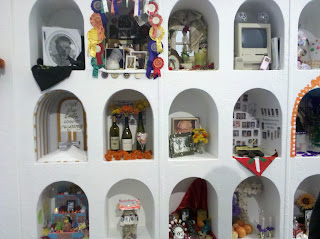 Part two of the altars. The second one on the top left and the third one on the middle bottom are my favorites in this bunch. The top one has a guy who was a very dedicated dog owner and pedigree judge. The bottom one deals with a family loving their grandma very much. They were very touching and heartfelt. 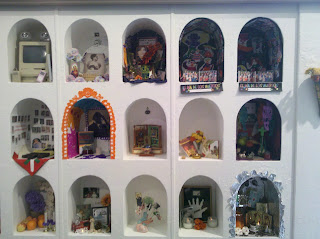 Part three of the wall altars. The last vertical line of altars on the right are the best in this group, and are all made by children. 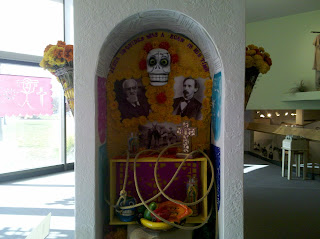 The main altar displayed up front. It's so cool! 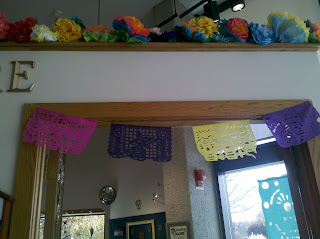 Traditional paper decorations up by the museum gift shop. 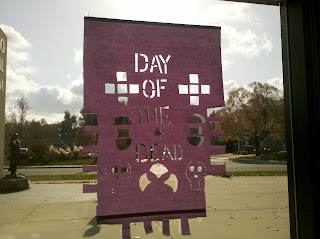 My favorite large paper decoration up by the front of the entrance. This was the last picture taken before we left. I would have taken pictures of the Pioneer Village, but my fingers would have frozen off. >.>