Hopefully, I'm all set to go in terms of the Countdown to Halloween! Grabbed this button since it's my favorite.

For those that haven't known, I have been lurking this countdown for quite some time, and have been debating on participating in this for awhile.

I'm so excited for this countdown to start. You have no idea.

I hope my posts don't suck. There are so many amazing blogs on this list that have fantastic writers, artists, reviewers, and photographers. It's quite an honor to be a part of this.

Stay tuned!
Posted by Unknown at 3:06 AM No comments:

My little girl is so smiley 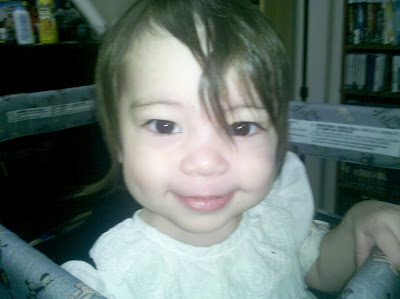 I usually don't talk about Kickstarter campaigns, but I personally know this group and how awesome they are. Dead Town as an event is over the top and amazing to participate in.

Help support them since they only have four days left!!!
Posted by Unknown at 2:05 AM No comments:

...I plan on posting everyday in October. All of these posts will deal with horror related things, Halloween, and fall stuff in general.

Lesson of the day: Sunday edition

Unless you can mind read, you don't know what's on a person's mind for sure. Projecting what you want on others by predicting what other people want just leads to disappointment a good portion of the time.
Posted by Unknown at 8:55 PM No comments:

It really frustrates me when I'm so close to completing a goal, and then everything turns to hell at the end, making the one goal that was possible incredibly impossible.

In this case, my work promotion was affected. They're going back to the old promotion system once month end hits finally, which is 4 p.m. MST here.

It really sucks since I've been in this company for a bit, and I always hit a snag around the end of the month when I want to do my best.  It's mostly been family issues, people flaking out, and transportation issues that have been the worst to deal with. I've decided that I'm only going to use car insurance money I have saved  when the weather is completely terrible out to be able to use Ian's car, and invest in a retro commuter styled bike instead for others until I have enough money for a scooter or car in cash. That Vespa on Shopkick is so tempting and so far away in points.

I guess there's always next month, but now all my work will be from scratch just trying to get this promotion and it will take twice the time to get where I want to be in this company.

Everything seemed to play out nicely yesterday for a change.

I got to sleep in, for one. Which is a miracle in and of itself. My sleep schedule has been messed up with Evelyn being on a rampage night after night with teething or just being overtly fussy, especially during these last weeks. Woke up a bit groggy, but that wasn't an issue. Being able to sleep is wonderful. It makes one wonder why they hated naps when they were a kid. I got multiple sessions of time out in kindergarten when I wouldn't go to sleep when the other kids did. I think I regretted not getting enough sleep in middle school, and paid for it when early mornings came around. My internal clock did not help matters much, and I didn't need an alarm clock then. Things became so bad in high school that I needed to set the timer on my cell phone during my Sophomore year. High school and college were the same, when it came right down to sleep. Parenting trumps all though. Holy crap. If you haven't had kids yet/are childless, enjoy your sleep while you can. Everything makes sleep unpredictable when kids exist in your life.

For Nicole's, Cliff's, and Raevyn's farewell party, I still had no idea what to make. Chili was out of the question, since there were no more Bush's baked beans in the pantry area. There were not enough shells to make loaded macaroni and cheese. I was literally stumped. Nicole told me that it wasn't a problem, and to just come over so they could see us. I literally couldn't be happier. It felt like a weight was taken off of my shoulders, since I didn't have to worry about making things for this potluck anymore. On that note, making things for any potluck can be pretty tricky. Timing and having ingredients on hand is crucial if you don't want to be screwed over.

Ian fought with sleep for awhile yesterday. He stayed for the whole church time, socializing with everyone upstairs for a bit, mostly discussing the game plan laid out for what was going on during Halo 4. Personally, I think the whole argument going around is stupid, especially since nobody wants their friendships ruined over this dilemma. Adventure Time was also watched before he actually slept for a whole two hours. I love dark humored shows. We're still going through the first season in order, since Steph let us borrow her first season set. The bits and pieces I saw of Adventure Time beforehand were scattered in multiple seasons. Just for the record, my favorite character is Marceline. The way they depict vampires on Adventure Time is quite interesting, really. After watching a couple of episodes of Adventure Time, I was forced to stay up and get Evelyn to calm down. Knowing that anything Disney would keep her awake for hours, I flipped through channels. I decided on ABC Family as a good channel. I watched a good majority of Sweet Home Alabama until I realized that we were going to be late for the meeting with the bishop, and Ian hadn't woken up to his alarm. After screaming at him to wake up for what seems like in two minute intervals, he finally snapped out of it, and got ready. We were late, of course.

This visit to the bishop worked out pretty well. In fact, it worked out so well that the bishop suggested a temple recommend and priesthood initiation interview for Ian. As his sponsor, I couldn't be more prouder of Ian this afternoon, especially with all of his progress in his personal matter of which I won't post about on here since it's confidential with us three. I'm not going to lie-this bishop is pretty much tied in coolness with Ian's bishop he had that married us. He even wants me to design a logo for him! It seems that the bishops that deal with law related matters are pretty much the coolest and actually want to help people out whilst getting stuff done in the process. The previous bishop that was the head of this ward gives me the creeps whenever I see him. That guy has a pretty frightening aura about him, making me not want to be around him for too long.

After switching clothes and getting showered after we got back, we made a beeline for Ann Morrison Park where the farewell party was held. After not being to Ann Morrison in years, we accidentally parked on the opposite side of the park, forcing us to walk quite the distance. Luckily, it was a pretty balmy day without grass fire smoke. I'm so thankful for the rain we've had as of late. Anywho, we made it over to the farewell gathering. The table that everyone was at was between the fountain and the playground in the shade. Socializing was awkward for a bit, but I made my rounds with a good majority of people when I realized that they were over at Nicole's baby shower. The people that were there at the time were pretty awesome and quite friendly. We shared good foods, drinks, and banter.

Well, that's all for this post. I'm going to read more of the sketching lessons book I picked up from the Library!, and put it to good use with the character models I'm planning and in general with my future sketches. After I get to the point of exhaustion, I'll put the book down and sleep. Goodnight everybody! <3
Posted by Unknown at 12:53 AM No comments:

What has bothered me as of late is the fact that people that I love have been trying to guilt trip me into doing things that I don't want to do.

Has that ever happened to you? It's just an awful feeling.

Some of these guilt trips force me to improve myself so I won't be bothered with them again, while others linger and fester about since they're out of my power. It's quite unfair.