The Countdown to Halloween: Trick or treating for UNICEF

(Posting this since some of the Fear Series posts are still in the works. The ones that are getting revamped will be lumped together.)

I'm glad that I was able to start up this tradition again. I participated in this since I was in the fourth grade, specifically in Girl Scouts. We were handed these boxes by my troop leader that we had to build, and then sent out in small groups to collect donations. Collecting donations for kids in need made me feel warm and fuzzy inside. I remember after we were done, we would go to a local corn maze, pick pumpkins, carve the pumpkins, and enjoy hot apple cider together. It was a blast, and I have always associated trick or treating for UNICEF with awesome memories. It was skipped last year due to focusing on graduating from Stevens-Henager College. With restarting this tradition, I hope to leave Evelyn was awesome memories that she'll cherish for years to come, along with teaching her good morals. 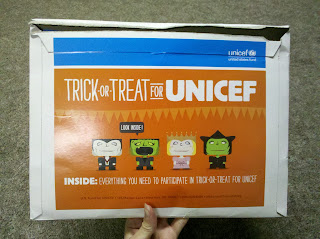 The cute kit that held everything for trick or treating for UNICEF. It, unfortunately, got here three days later than the Halloween party, so we weren't able to trick or treat as a group. To make things fair with the lack of boxes, they became first come, first serve. All of my friends that receive the boxes are either going trick or treating with us, or are throwing random events to promote raising money for UNICEF. I was even thinking about doing a bake sale for this. 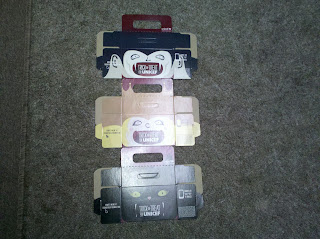 The selection of boxes that UNICEF sent me. I asked for twenty, and they sent me twelve. They also sent me princess boxes when I requested the witch or pumpkin design instead. :/ So far, Steph and I have claimed the black cat boxes. Evelyn and Eli both claimed vampire boxes. There are only eight total boxes left that are up for grabs within my group of friends.

Email ThisBlogThis!Share to TwitterShare to FacebookShare to Pinterest
Labels: Countdown to Halloween 2012, Spooky Season, Trick or Treating for UNICEF